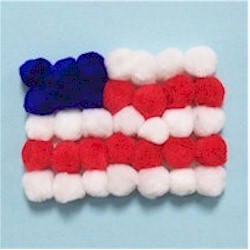 June 6th is D Day. Have the kids make a pom pom flag to honor our service men and women who have served their country. This is an easy craft for younger children who are just learning about our country’s history.

Trivia: On June 6, 1944 during World War II British and US soldier crossed the English Channel to invade German-occupied France. It was considered the beginning of the end of the war.

Lay out three blue pom poms and four white pom poms along the top edge of the cardboard gluing in place.

Next row is three blue and four red.

Glue all in place.