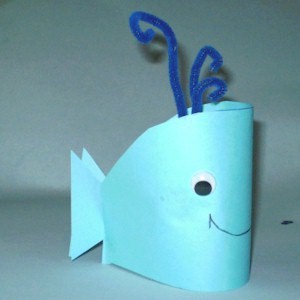 This Willie the Whale Craft is an easy craft that even little kids can enjoy making and would make a good VBS High Seas project.  The materials required are inexpensive and probably already in your craft closet.

Trivia: Blue  Whales can be as big as 100 feet long and weigh up to 160 tons. They eat up to 8 tons of crustaceans a day during their feeding period.

Under The Sea Printable

To make this Willie the Whale Craft measure a 3 inch by 8 1/2 inch strip on your cardstock. We used blue to represent the Blue Whales. Cut carefully on the line.

Next fold the strip in half without creasing and cut a gentle curve from top to half cut to create the whale's body.

Locate the middle of the strip and draw in your whale's mouth and glue on the wiggle eyes.

Insert the two slit ends to form the whale's body.

Using the picture as a reference cut out the tail fins being careful not to cut them off.

I decided our whale needed a water spout and used a miscellaneous piece of styrofoam in which I inserted a pipe cleaner that I had cut in different lengths. Curl the ends to simulate the water spray and glue inside the whale.

One thought on “Willie the Whale Craft”