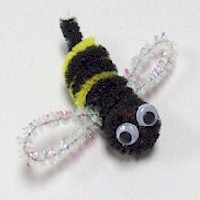 Spring is in the air and the bees are buzzing. This Pom Pom Fuzzy Bee is here to remind you to explore and enjoy the outdoors everyday.

Coil a black fuzzy stick around a pen.

Cut a yellow fuzzy stick in half. Coil half around the pen easing it between the black coils.

Slide both fuzzy sticks off in one piece. Set aside the other half of the yellow fuzzy stick aside for another project.

Bend out end of the black coil for a stinger.

Cut a shimmer stick in half. Bend half into two loops for the wings. Ease between coils. Set aside other half.