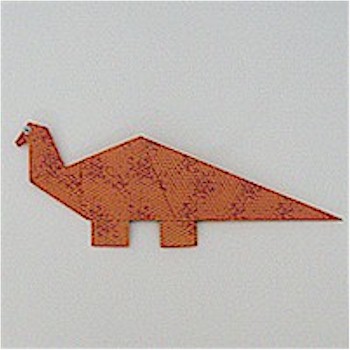 This Origami Dinosaur is a great way for kids to explore the world of origami. It also teaches the fine motor skills of precise folding to create a figure that will amaze young children.

Make and Fly a Rotocopter

Fold paper in half diagonally. Crease

Fold sides to the middle. Crease.

Fold top point down to middle and bottom up to middle. Crease well.

Turn over. Fold right hand point past middle as shown in diagram. Crease. Fold tip back to right. Crease

Fold in half. Crease.

Ease neck out of middle of body as shown in diagram. Crease

Ease head out of middle of neck as shown in diagram. Crease Glue on wiggle eyes.