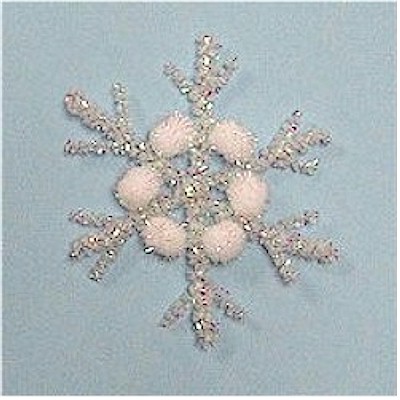 No snow where you are…or even if you do. Make this Pom Pom Snowflake (in fact make lots of them) and get into the mood of fun wintery weather without the snow shovel.

Trivia: Though snow has long been a feature of the natural world in some climes at some times, current available evidence of the word snowflake dates it only to the early 18th century. Flakes and crystals of snow existed long before then, of course, but they were known by such charming words as flother and flaw and flaucht. The lost history of ‘snowflake’from Merriam-Webster

Do you have a unique idea for a snowflake? Enter our Free Kids Crafts Contest and show us your stuff.

Thin Stick such as a skewer or a thin paint brush

Arrange the three coils in a snowflake shape interlocking the coils in the middle.