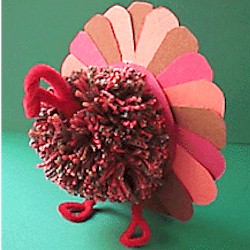 Turkey crafts are a must for Thanksgiving. Not all turkeys are brown and red especially if the kids get to chose their favorite colors. Let them pick their three favorite colors and make this attractive centerpiece decoration.

3 pipe cleaners ( we used red, but orange or brown would work nicely too.)
Thin cardboard at least 6"x 6"
1-2 skeins Watercolours. Choose any of the variegated threads in browns, oranges or reds of your choice. (How full you make the pom-pom center will determine how much thread you need to use)
Compass, Ruler, Scissor, Paper Glue, Stapler
1 Moderately sharp needle and one blunt yarn needle
Heavyweight construction paper (we used two sheets of red, 1 of brown and one of orange)
Mat knife or Exacto knife

Using the compass on the cardboard draw 2 circles: 3 1/2" wide with another circle in the center 1" in diameter.

Thread approximately 50" of the Watercolours thread into blunt needle. (If you double up the strands of thread, this part will take less time).

Use the intructions below for making the pomp-pom body of the tukey. You will be using variegated thread but otherwise the intructions are the same. Put the 2 circles face to face and bring thread through center and around the edge and then back through the center, moving around the disk and covering the cardboard disc as you go around. Make about 3 or more layers around the disc. Use as much thread as you need to cover the cardboard. The more layers you do the fuller the pom-pom will be. When you are done, you should have almost no opening in the center.

Insert the 3 pipe cleaners through the opening in the center of the uncut pom-pom. Pull them half way through. (Note : The picture shows only one pipe cleaner you are using three.)

Slip a sharp scissors point between the 2 cardboard discs and cut the threads all around the edge of the circles. Wind and tie with a separate thread between the 2 discs. Pull this tight before tying the knot. Then pull the discs off over the thread ends or cut the cardboard on one side to remove.

Fluff the pom-pom making a puffy ball shape. This is the turkey's body and the pipe cleaners will make the beak and head on one end. The three on the other end will be used for feet and to attach to the paper feathers.

Twist the three pipe cleaners on one end together and then bend them into a beak shape as shown in the picture below. Tuck the ends into the pom pom.

Now you'll assemble the top feathers. Place one of the circles down on a flat surface. Put a a strip of glue from the center to the edge as shown below and then taking one of the top feathers lay them on the circle being careful to not cover up the center mark. In a clockwise motion proceed gluing and pasting feathers overlapping as shown around the circle until you've gone up one side with 7 feathers. Repeat on the next side. Lay the last three feathers and fill in the top of the circle so that you've now covered 3/4's of the circle. Glue the entire back of the second red circle and paste it on top of the feathers lining it up with the bottom circle.

Now the tail feathers. Take one of each color of the tail feathers and overlap them about 1/4 inch making sure they are flush at the bottom edge (the wider edge). Staple them together with two staples about 1/2" and 1" from the top edge. Repeat with the other 3 tail feathers. (You will still have one left over.) Overlap the two sides, and glue them and then place the last feather in the middle as shown below.

Now step back and admire your handiwork! 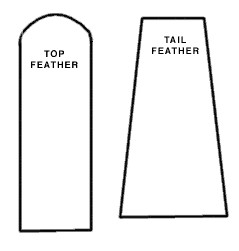 With The CARON Collection's "Dyed and Gone to Heaven" web site Lois hopes to provide the inspiration for others for a lifelong love affair with needlework . We hope our visitors will tour the site and take advantage of all the resources it has to offer. Have fun and enjoy! And please support your local needlework shops who have helped so many get started in this rewarding and creative field.