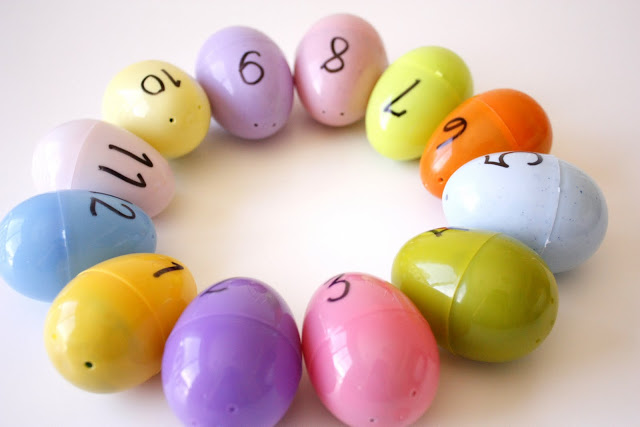 This 12 Day Easter Egg Project is a take off on the 12 days of Christmas and tells the Easter story in a fun way that children will enjoy and remember.

I googled “12 days of Easter” to get my list. There are several variations on the first page of the google search. So search there if you don’t like my list.

Write the scripture references on a piece paper then cut into 12 strips. I also included a short sentence summarizing the scriptures but that’s not totally necessary.

Tuck the paper strip and the gift/trinket listed in parentheses into each egg.

And pile them in a pretty little basket.

Take one egg out each night in succession, look up the scripture in your Bible, and let your children hold the trinket and learn hands-on more about the Savior. This is such a great way to help children learn the true meaning of why we celebrate Easter, and a really good reminder for us adults too. :)

1. Matthew 26:39
And he went a little further, and fell on his face, and prayed, saying, “O my Father, if it be possible, let this cup pass from me: nevertheless
not as I will, but as thou wilt.”

2. Matthew 26:14-15
Then one of the twelve, called Judas Iscariot, went unto the chief priests,
And said unto them, “What will ye give me, and I will deliver him unto you?” And they covenanted with him for thirty pieces of silver.

3. Matthew 27:1-2
When the morning was come, all the chief priests and elders of the people took counsel against Jesus to put him to death:
And when they had bound him, they led him away, and delivered him to Pontius Pilate the governor.

4. Matthew 27: 24-26
When Pilate saw that he could prevail nothing, but that rather a tumult was made, he took water, and washed his hands before the
multitude, saying, “I am innocent of the blood of this just person: see ye to it.”
Then answered all the people, and said, “His blood be on us, and on our children.”
Then released he Barabbas unto them: and when he had scourged Jesus, he delivered him to be crucified.

5. Matthew 27: 28-30
And they stripped him, and put on him a scarlet robe.
And when they had platted a crown of thorns, they put it upon his head, and a reed in his right hand: and they bowed the knee before him,
and mocked him, saying, “Hail, King of the Jews!”
And they spit upon him, and took the reed, and smote him on the head.

6. Matthew 27: 31-32
And after that they had mocked him, they took the robe off from him, and put his own raiment on him, and led him away to crucify him.
And as they came out, they found a man of Cyrene, Simon by name: him they compelled to bear his cross.
[And he was nailed to the cross, and crucified.]

7. Mark 15: 24
And when they had crucified him, they parted his garments, casting lots upon them, …

8. Matthew 27: 50-51, 54
Jesus, when he had cried again with a loud voice, yielded up the ghost.
And, behold, the veil of the temple was rent in twain from the top to the bottom; and the earth did quake, and the rocks rent;
Now when the centurion, and they that were with him, watching Jesus, saw the earthquake, and those things that were done, they feared
greatly, saying, “Truly this was the Son of God.”

9. Matthew 27: 57-60
When the even was come, there came a rich man of Arimathaea, named Joseph, who also himself was Jesus’ disciple:
He went to Pilate, and begged the body of Jesus. Then Pilate commanded the body to be delivered.
And when Joseph had taken the body, he wrapped it in a clean linen cloth,
And laid it in his own new tomb, which he had hewn out in the rock:

10. Matthew 27: 60, 62, 65-66
And he rolled a great stone to the door of the sepulchre, and departed.
Now the next day, that followed the day of the preparation, the chief priests and Pharisees came together unto Pilate…
Pilate said unto them, Ye have a watch: go your way, make it as sure as ye can.
So they went, and made the sepulchre sure, sealing the stone, and setting a watch.

11. Mark 16:1, Matthew 28: 2, 5
And when the Sabbath was past, Mary Magdalene, and Mary the mother of James, and Salome, had brought sweet spices, that they might
come and anoint him.
And, behold, there was a great earthquake: for the angel of the Lord descended from heaven, and came and rolled back the stone from
the door, and sat upon it.
And the angel answered and said unto the women, “Fear not ye: for I know that ye seek Jesus, which was crucified.” 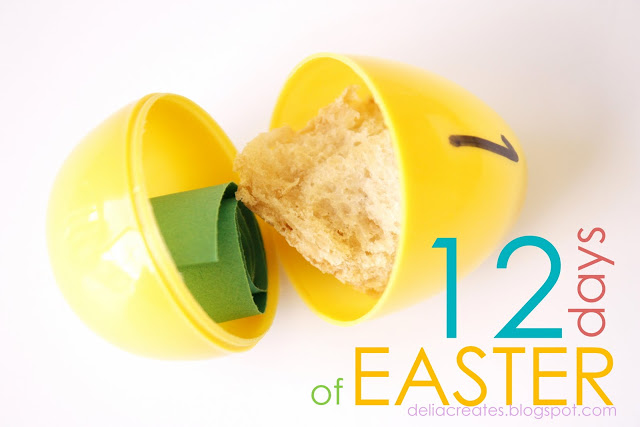 I'm Delia and I blog at www.deliacreates.com. I am a crafter, sewist, photographer, crocheter, and general DIY-er. I have three kids who I love to create for and with. They are often my inspiration and my muses. I even have a section of my blog dedicated to them, call Kids Create: http://www.deliacreates.com/kids-create.