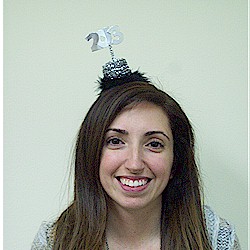 Stephanie of MakingFriends.com put on her creative thinking cap to design this delightful fascinator in time for New Year’s Eve celebrations. You’ll have fun making it and be the belle of the night.

Turn the K-cup upside down. Using glue gun adhere the boa to the bottom rim of the K-Cup. Cut off the extra.

Take  tinsel stems and wrap it around the k-cup, continue until it is covered. If needed use glue gun to secure.

Put a layer of tacky glue on top of the k-cup and cover with glitter and gems.

Using the point of the safety pin make a hole on the top center of the k-cup.

Cut a piece of tinsel in half and push through the hole.

Cut out numbers "2013" and use glue dots to hold the numbers together.

Attach "2013" to the tinsel stem by using glue dots. Finish by gluing your hat to a head bead.