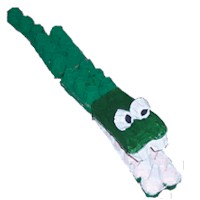 This craft reprinted courtesy of childlearningsupport.com.

This is a fun exercise for your kids to do and much safer than encountering the real thing!

Cable ties or string to connect the cartons together.
A wooden skewer or toothpick.
Two small pieces of cardboard to secure the eyes to the head assembly.

When you are making this crocodile make sure that the egg cartons that you use are clean and free from any left over egg. If you are able to locate them, unused egg cartons are the best choice when completing this activity.

If your child is allergic to eggs, I suggest that you do not use this method of making a crocodile.

Three half dozen egg cartons are used for the body and tail sections.

The Mouth
Start with the upper section of the mouth and paint the top surface of the carton which is flat green and the bottom side white.

Now paint the other carton, which only has the lower section with green paint on the underside and with white paint on the top, i.e. the teeth.

In addition to the white paint, you can also add some pink paint, for the crocodile's gums.

The mouth is joined together as shown in the photograph by bringing the two sections together. The top and bottom teeth will hold them together but if you want the mouth to remain open, you will need to wedge a small toothpick between the upper and lower sections at the back, since otherwise it will tend to close.

The Body and The Tail
Paint two of the half dozen egg cartons green on the outside. These will be used later for the two body sections.

Cut the third half dozen egg carton in half lengthways, so that there are two rows of three.

Paint one of these sections green and put the other one aside, which will be used for the eyes.

The eyes are made using the other row of three as explained above. Make the eyes from single domes of the egg carton and paint them white and when dry, add a spot of black in the middle for the pupil.

The sections of the crocodile are connected using cable ties or string. Holes need to be made in the mouth, body and tail sections, so that they can be attached together. To do this I suggest using a toothpick or skewer to make small holes in the front and rear of the body sections.
the rear of the mouth and the front of the tail. If you are using string, be sure to tie a knot on the end so that it remains secured and does not slip out of the holes. If you are using cable ties, wrap them around a few times so that they remain connected.

Attach the eyes in place using a small piece of cardboard as a hinge (see the photograph of the completed crocodile to see where to place the eyes) and secure them with cellotape or masking tape.

Helen Thompson is a nursery nurse behind childlearningsupport.com. Her goal is to provide valuable information and activities for parents, teachers and carers, who often lack the time in the modern busy world to put these together for themselves.