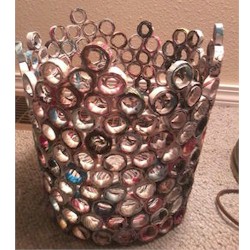 Take all of those magazines and catalogues that fill up your mailbox and recycle them into this beautiful wastebasket.

First you need to gather a good amount of magazines, some mod podge, a paint brush and scissors.

After gathering everything you need. You get to start ripping out pages of magazines. For the base cut the pages in half (creating two long pieces) and for the circles up the sides cut them into thirds.

To make the base you do the same thing as if you were making a magazine bowl. You fold strips of magazines so that they are long and skinny. The width will be the height of your base. You first coil one strip upon itself and paint some mod podge on so it will stay.

Then you take the next piece and coil that around the first, gluing as you go, and so on until you like the size. The base will be a little larger than your circle (because you will be gluing the circles to the outside of it) so keep that in mind.

After finishing the base make a mixture of some mod podge and water so it would be easier to apply. Then paint the entire base until you feel it was good. This makes it much more stable and permanent.

Now the little circles are what take a long time because there are so many of them. There may be a better way to do this, but this worked for me. Fold the strips just like for the base and glue them so they will not unravel. Then coil them around a marker and glue them so once again they will keep their shape.

Use the same water and glue mixture as before and paint each circle (once again part of the time consumption), which makes them more stable.

Next, the fun part. After all that work you get to put it all together. First glue one layer of circles around the base, using a hot glue gun.

And then glue another layer and so on. The hot glue leaves strands sometimes; don't worry about them you can pull them off when it all drys.

And there you have it, a cute waste basket.

This project is reprinted courtesy of CutOut&Keep.net.

Cut Out + Keep is an online community for making and sharing step-by-step craft tutorials. Members can try out thousands of how-to craft projects, read our online magazine Snippets, listen to the podcast, read our crafty blog, add friends and chat in the forums. The site was started in 2003 as a craft blog by 23-year-old Scottish crafter, Cat Morley. http://www.catmorley.com