Ooooo this bat will pop right up to give you a fright. Pop ups are great crafts to use for a special card.

Click on printables and print out the pages on a heavy paper, like card stock or construction paper. If you want to make a larger bat, enlarge all pieces the same amount on a copy machine.

Lay the card that has the outline of the bat's feet on a flat surface.Take a ruler and line the edge of it up against the center fold line of the card.Use the rounded end of a paper clip (or a ball point pen that has run out of ink) and press it along the dotted, center line carefully scoring the card all the way from top to bottom.

Cut the card out carefully following the solid, black lines around the edges.

Fold the card in half, closing it along the center fold line you've just scored. Crease it with your thumb and finger, then open the card up again.Put the card aside for now.

Take your ruler and carefully score ALL the dotted lines on the sheet that has the pop-up bat on it.Take your time and make sure you score ALL the lines.

Cut the bat pop-up piece out carefully following the solid, black lines around the edges.

Fold the entire pop-up piece in half along the center fold line, making sure that all the dotted lines are still visible...and crease with your thumb or finger.

Open the pop-up piece again and lay it on a flat surface.

Take hold of the lower left foot. Fold the lower LEFT foot up towards the body and crease the fold with your thumb or finger.Lower the left foot back down again.

Take hold of the lower RIGHT foot......and fold it up towards the body creasing it with your thumb or finger. Lower the right foot back down again.

The main body is folded towards you, leaning slightly forward and the feet are both flat.

Open the wing back up and repeat this process on the other side.

The wings are leaning in from the sides of the body and the feet are still flat.

Take your card and apply glue only to the insides of the feet areas.

Place the feet of the pop-up bat over the feet areas on the card and carefully press down letting the glue dry.

After the glue has dried carefully close the card.
`
Decorate with crayons, markers or colored pencils then show your scary creation to your friends!

Click here for a pop up witch to go with your bat. 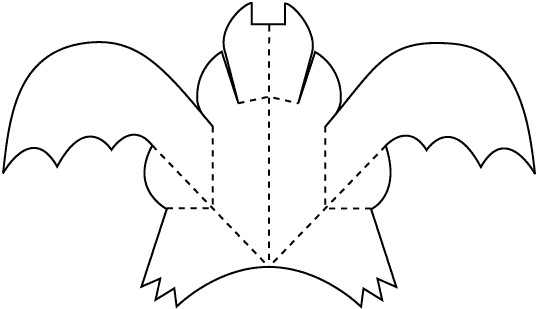 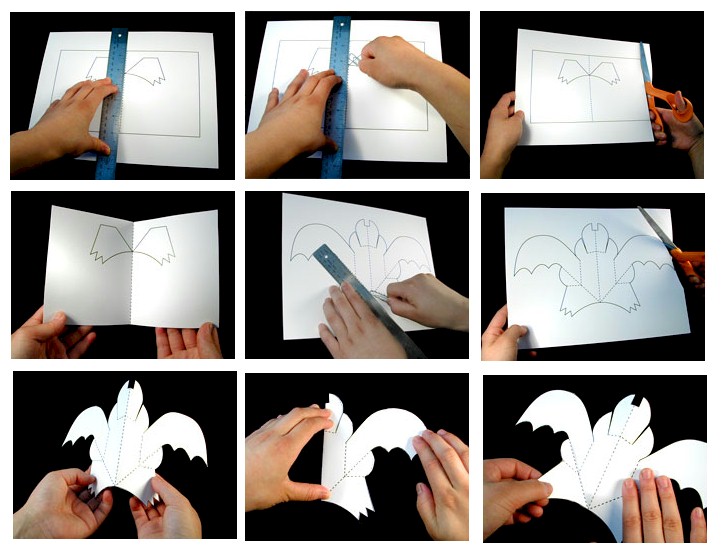 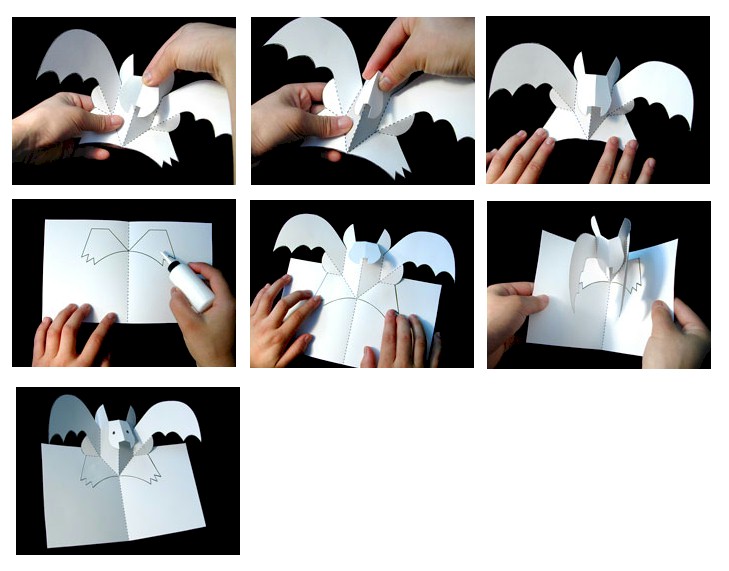