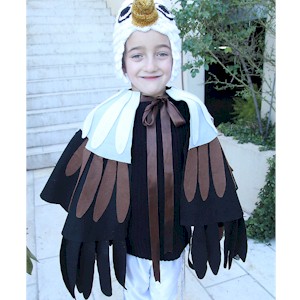 The kids can help you Make An Eagle Costume for Purim or Halloween or Save the Eagle’s Day.  Family projects are a great way to bond with the kids. Be sure to plan ahead so you have your materials and enough time so the project is fun and not stressful.

Trivia: Both male and female adult bald eagles have a blackish-brown back and breast; a white head, neck, and tail; and yellow feet and bill while Juvenile bald eagles are a mixture of brown and white. They reach full maturity in four to five years.

To Make An Eagle Costume you need to start with a basic cape pattern made from a circle of felt with a smaller circle cut out in the middle for the neck. The best way to do this is to cut a square that is the width of your child's reach, (measure from wrist to wrist with arms held straight out) and then fold that square into four and mark a curve of a quarter circle and cut through all the layers. Cut a small quarter circle out for the neck. Unfold and then remove some portion of the circle for the opening, in this case quite a bit, but you'll have to see what works for you. You could also make this a closed cape for a smaller child.

Cut a second layer of grey for the shoulder area, with a bit of a contoured edge.

Create a feather pattern and have the kids cut lots of feathers and arrange on the cape, with the ends of the feathers glued behind, except for the neck portion.

Affix everything with hot glue, including a ribbon at the front and some velcro cuffs on the inside to attach the cape to the child's wrists. This little detail is what allows the child to raise his wings, so it's really an important added touch! 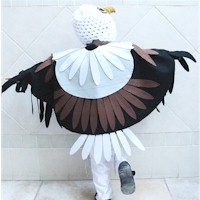 Visit me at CreativeJewishMom.com. on the exciting journey of giving greater meaning to the everyday through creativity. This blog is my way of sharing with you the joys of crafting, decorating, cooking, and gardening. I love simple ideas, recycling and quick transformations.

One thought on “Make An Eagle Costume”