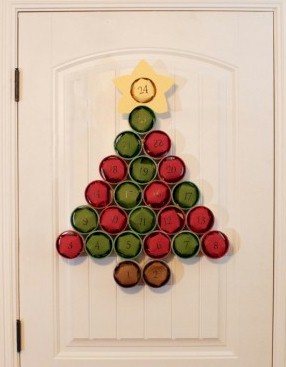 Start collecting heavyweight cardboard tubes to create this Cardboard Tube Advent Calendar. The cardboard cylinders used measure 3″ across and 2″ deep, but can be adapted to any size you have as long as the cardboard is pretty strong. You could even get PVC pipe and cut it into pieces. The most important criteria is to make sure you choose something big  and strong enough to hold a present inside.

Take 24 of the cylinders and lay them out on the floor into a tree shape.

Paint the insides of the cylinders. I painted one of them yellow and two of them brown. The rest were painted half red and half green. When the insides are dry, paint the outsides white.

To make the star on top, put two cylinders on a piece of yellow cardstock and trace their outlines with a pencil. I traced on the inside of the top cylinder and the outside of the bottom one. Then I drew a star shape around the top circle on the cardstock.

Cut the star shape out and use hot glue to attach it to the front of the yellow cylinder.

With the glue gun, put a bead of glue on one of the cylinders and press it up against the yellow one, lining it up under the star.

Lay out the cylindars so that you are happy with the pattern and glue them in place. Note that I put the cylinders upside down on the table when gluing. I did this because all my cylinders weren’t the exact same depth, and I wanted them to be flush and even on the front!

A good system for gluing the cylindars is to first put the cylinder in place, then draw little marks on it with a pencil where it touched the other cylinders. Then add the glue in line with the marks, and when pressed it into place.

To add the gifts. Wrap them with cardstock. The project shows red, green, brown, and yellow. I also found some number stickers in my scrapbooking stash. I cut the cardstock into 6″x6″ squares.

Find a jar that is almost as wide as your cylinders, set the cardstock on top, and squash it down with your hands, forming a sort of cup shape. While it is still flat on the jar, add the number for the day (1 through 24).

Then tuck a little gift inside and tape it shut. No, it’s not pretty, but it’s good enough!

Put a gift into each compartment.

Notes: The tree can hang on a simple nail or Command hook, but here are a few things to be careful of:
Be sure you don’t hang it by the top (star) cylinder, because it’s only attached to the next one with one bead of glue. Use at least the second cylinder, which is attached in more than one place

Don’t put too many heavy toys in the compartments, or the weight might pull the glue apart.

If you make this out of PVC, hot glue might not be strong enough to hold the weight. Set it on a table or mantle instead of hanging it on the wall. 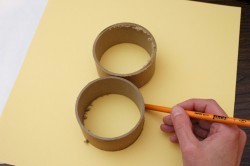 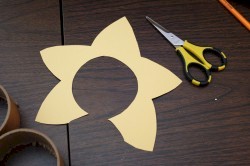 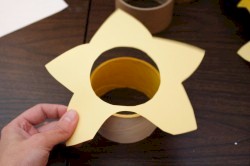 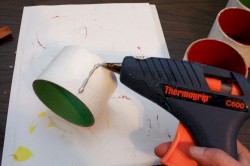 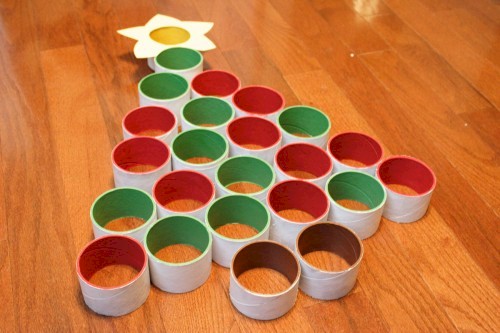 "We are Chica and Jo and we are crafty, frugal, and fun!  We will help you unlock your inner crafter with new and creative projects, using inexpensive, everyday items.  Visit us whenever you need ideas, crafts, or inspiration for just about anything!  Our hundreds of free tutorials loaded with photos and video make us your ultimate online guides for all things crafty."